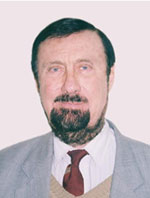 A well-known scientist in the field of electrical and magnetic measurements, and simulation in electrical engineering. Doctor of engineering sciences (1973), professor (1979), corresponding member of NAS of Ukraine (2000).

Winner of the State prize of Ukraine in the field of sciences and technology, and the prize of NASU named after S.O. Lebedev. Honoured inventor of Ukraine.

Author of over 425 scientific publications, including 12 monographs, 250 articles and reports, 3 methodological manuals, 172 author’s certificates and 27 patents of the leading countries.

S.G. Taranov has developed a new method of transient processes analysis for the classes of objects described by nonlinear differential equations with variable coefficients that can be expressed in discontinuous functions. With participation of S.G. Taranov an information-measuring diagnostic system to determine the extent of degradation of power objects was established.