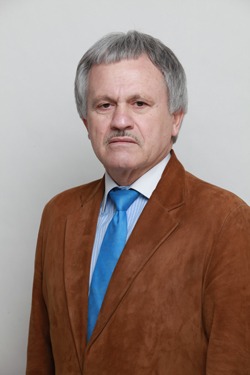 A well-known scientist in the field of electrical engineering and electrical power engineering. Doctor of engineering sciences (1993), professor (2001), corresponding member of NAS of Ukraine (2003).

Head of the department of power supply of technological systems of the Institute of Electrodynamics of NAS of Ukraine (since 1995 until now).

Winner of the Sstate prize of Ukraine in the field of sciences and technology, and the prize of NAS of Ukraine named after V.M. Khrushchev.

Author of over 340 scientific publications, including 8 monographs, 14 methodological manuals, and 32 patents and inventions.

Scientific researches of A.A. Shcherba are aimed at the development of the theory of nonsteady electrophysical processes and development of competitive technologies and electrical equipment for power engineering and manufacturing industry. He discovered the phenomenon of additional distortion  of the electric field as a set of closely-placed microinclusions in dielectrics, particularly in nanomodified polymer insulation of high-voltage cables. He substantiated new regularities of electrophysical processes behavior in local areas of such isolation and developed kinetic-activation theory of threshold mechanisms of its’ degradation in the disturbed electric field. Based on the analysis of local disturbances of the electric field and intense amounts of insulation, he developed new criteria for its’ quality evaluation.