National Academy of Sciences of Ukraine
Institute of Electrodynamics
23
September
Sorry, this entry is only available in Ukrainian. 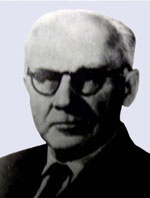 corresponding member of AS of Ukrainian SSR

A well-known scientist in the field of electrical measuring techniques and electrical instrument engineering.

Doctor of engineering sciences (1937), corresponding member of AS of Ukrainian SSR (1951).

Author of over 80 scientific works on electrical and magnetic measurements.

A.D. Nesterenko is one of the first scientific supervisors and organizers of the electrical instrument engineering in Ukraine. He developed new original methods for creating and designing electrical measuring instruments.

Scientific works of A.D. Nesterenko are devoted to the theoretical foundations of electrical engineering, electrical and magnetic measurements, the development of the theory of phase meters and automatic balancing systems.