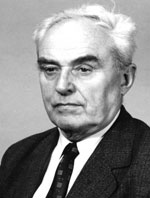 A well-known scientist in the field of automatic control, cybernetics and information science.  Doctor of engineering sciences (1954), corresponding member of AS of Ukrainian SSR (1961), academician  of NAS of Ukraine (2003).

The author of around 40 monographs and over 400 scientific articles.

He is an author of the first national monograph on technical cybernetics, which was repeatedly published abroad. Further development of the principles of combined control in O.G. Ivakhnenko’s works is related to the use of the principles, devices and methods of self-tuning,  self-learning, pattern recognition and prediction in the control systems.