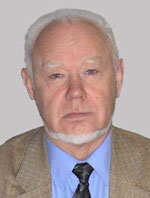 A well-known scientist in the field of electrical engineering, theory of electrical circuits, transformation and stabilization of the parameters of electromagnetic energy, current stabilization systems for modern electrotechnics. Doctor of engineering sciences (1973), professor (1978), corresponding member of NASU (1988).

Head of the department of stabilized current systems of the Institute of Electrodynamics of NAS of Ukraine (since 1974 until now).

Author of over 250 publications, 10 monographs, 220 inventions and patents of foreign countries.

A research area of I.V. Volkov is development and wide practical application of a new class of electrical devices – stabilized current systems, used to supply with power plants of new progressive technologies, such as plasma and arc, electron-ion, laser, electrohydraulic, magnetic-pulse etc. Tens of modern technology samples were created and commercially produced by industry on the basis of the developments of the department headed by I.V. Volkov.