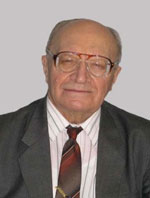 A well-known scientist in the field of electromechanics and power electric machine engineering. Doctor of engineering sciences (1974), professor (1980), corresponding member of NASU (1985), academician of NASof Ukraine (1988).

Winner of the State prize of Ukraine in the field of sciences and technology, and the prize of NAS of Ukraine named after G.F. Proskura.

Author of over 350 scientific works, including 8 monographs and over 120 author’s certificates on inventions and patents.

The main direction of the scientific activity of the scientist was the complex modeling of electromagnetic, thermophysical and thermodynamic processes in powerful turbogenerators and other large electric power machines based on the study of mathematical and physical models focused on the development of new structures and components of machines that are characterized by high load-carrying capacity and reliability.

The scientist established a general theory of a complex physical and mathematical simulation of electromagnetic, thermal and thermomechanical phenomena in high-power electric machines to ensure their reliability and operating life.